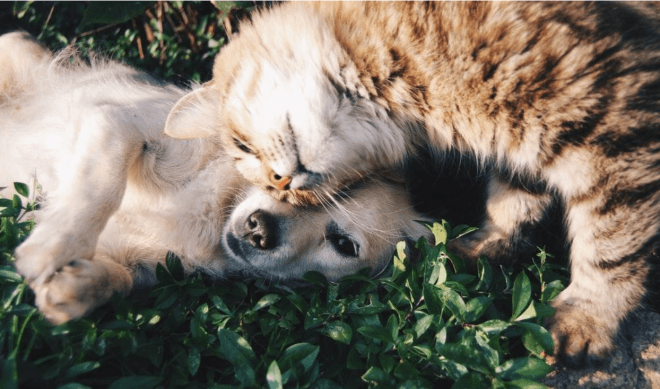 What would happen if you put a cat and dog in the same room in Chapel Hill pet boarding? For most people, the answer is clear: they would start chasing each other and fight.

But is this behavior universal? Is it always true? You might have seen videos of dogs and cats living peacefully in the same household, even cuddling and playing with their owners. So what truly happens in the relationship between cats and dogs?

The relationship between dogs and cats is close to predator and prey, and it’s hard for them to overcome this instinct. So if your dog sees a small animal—whether a cat, a raccoon, or a squirrel—its instincts will take over. Meanwhile, cats are naturally used to being chased. They’ve developed nimble legs and lightning-fast running speeds. The fastest animal in the world is a cat—the cheetah.

Dogs and cats show different behaviors to indicate different emotions. However, these behaviors can sometimes mean the opposite to the other party. For example, excited dogs who want to play tend to bounce around and bite playfully. Cats will take this as a threat, rejecting the dog and possibly swatting them away. This often leads to nasty fights.

Cats and dogs are highly territorial creatures. They’ll mark everything with their scent, from your bed to the car and even a play area. So if a cat approaches an object that your dog has marked, it can lead to a fight.

Of course, chasing and fighting don’t always happen between cats and dogs. They can coexist and share the same space, specifically if they grew up together. In addition, some dog breeds, such as Golden Retrievers and Collies, are much friendlier towards other animals.

If your dog has been well-trained, you need not worry about leaving them in Chapel Hill pet boarding facilities. Just make sure to find a kennel with more than enough space and is managed by professional caretakers.